May 26, 2019
After months, actually make that years, of walking every day and challenging myself, I finally registered for a race. I was happy to have registered at least. That's the first step to any goal is to decide to do it. As race day started getting closer and the forecast looked stormy, I thought to myself, "I might not do the race. I might have to stay home." A few minutes of introspection, and I told myself I had to do it. If the race was going on, I had to be there. I owed it to myself. I wasn't going to be "that person" who says she is going to do something and then never does.

I woke up early the morning of the race. Technically, my dog woke me up at 5:00 am because he had to do his business in the yard. I woke up, pulled my hair back, and let my rat terrier and my pomchi out into the yard. Even in the early morning, they were running and playing. When they came back in, I went back to bed for a few minutes. At 5:45 my alarm went off. I was excited, my heart was pumping already. Race day was here.

I bounded out of bed, practically skipped into the kitchen, and made my breakfast of water, coffee, berries, and cereal. I caught myself smiling as I ate. I was doing this. I was going to cross something off my Life List today. Following breakfast, I showered, dressed, and picked out my shoes for Race Day. Before I knew it, it was 6:45, time to go pick up my packet. I drove to the school where I thought the race was, but I had the location wrong. Good thing I had plenty of time. I drove to the actual location. From a distance, it looked like nothing special was going on that day. All the booths were set up behind a middle school.

As I walked up to the packet pickup place, I recognized someone in front of me. He was someone I knew from years ago, and I knew he was a runner. He was there with his son. It made the race more real, and I started getting a little jittery. I thought, "Maybe I am out of my league here. What am I thinking?" Still, I felt the excitement come back as I told the volunteer my name and spelled out my last name. I was handed a t-shirt and bib. I headed back home -- only a few minutes away from the race site -- changed my shirt, drank a glass of water, let the dogs out, and then hopped back in the car for the race.

At the race site, serious runners were warming up, stretching, and trying to loosen up their muscles. As a somewhat serious walker (walking 9.0 miles a day is no joke), I knew that I also needed to warm up my legs and muscles in order to prevent a knee injury. I walked around the parking lot and race area until the announcement for the kids' race came over the loudspeaker. It was time to head toward the starting line and line up. 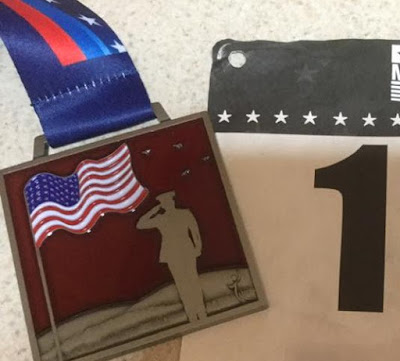 I stood nervously, anxiously, and happily in line. I told myself that my goal was to finish and not to be one of the last walkers to cross the finish line. I had already set a goal for myself to come in at 59:59 minutes, which I felt was a good goal. That is under a 20 minutes mile walking. As I looked around, scanning, surveying, and building camaraderie with the other participants, I saw someone out of the corner of my eye. A woman and her friends had been cruel and unkind to me in the past. My competitive nature came out. Suddenly, the race wasn't about beating my time, it was about beating her. I didn't care how well I did, as long as it was better than what she did.

The countdown started and the runners were off. I started off jogging, too, so I could put some distance between myself and the woman behind me. After the group of runners (almost everyone in front of me was running) turned the first corner, a hill loomed ahead. I thought, "Maybe I should walk." As I marched up the hill, a woman started walking next to me with her daughter. The daughter was maybe 4 years old, at the most. The mom was a serious runner and did "races" almost every weekend. I knew because she talked to other people as they huffed and puffed their way up the hill. She told her daughter, "We will walk uphill, and then run downhill, okay?" Great strategy, I thought. I decided I was going to adopt it and do the same thing. Let my body, the hill, and gravity carry me as I ran downhill. It turned out to be a great plan since there were more hills than I had anticipated.

The first mile came upon me more quickly than I expected. I checked the time on my watch. Yes, I wore my smartwatch because I wanted to check my pace. I was right at 16 minutes for the first mile. "Good job," I told myself. "Keep going. At this pace, you can come in at 48 minutes." I was excited to think I was going to beat my own goal, and I continued the walking/jogging routine. On the steep uphill grades, I told myself, "This is just like walking home at the end of your daily walk. See it's almost the same. You know how to do this." On the downhill runs, I would set a target to run to. I kept running until I passed that mark.

Then, I hit the steepest hill. It was one of those hills that reminded me of the hills in the Berkshires, the foothills of the mountains, instead of the Midwest. I remembered climbing those hills, hiking those mountains with 12-year-old campers, carrying sleeping bags, backpacks, and food for overnights. I tackled that hill the same way. "Use your quads, butt down, shoulders back, head up, larger steps, controlled breaths," I told myself as I hiked up the hill. I could feel the distance increasing between myself and the walkers/runners behind me. At the top of the hill was my prize, a water station. I was so happy to see water like I had been looking all day for it.

Next thing I knew, I was running down one last downhill grade. "Make it to that sign," I told myself. When I reached a sign, there was a turn, and I could see the finish line. I was ecstatic. I made it. I did the whole thing. Even though when I started the race, I expected myself to finish it, finishing was something different. I checked my watch. I had 3 minutes left on my timer. I pushed forward and crossed the finish line at 49:50:9.