How "Bragging About You" Started

February 26, 2022
The first half of my career, I worked in clinics, hospitals, and health systems. I led several teams, and it was always important to me to get the teams to gel right away. That helped the team work better together to achieve a common goal. At the beginning of every team meeting, we would have some sort of ice breaker that was specifically designed to show how important each person was and demonstrate what they brought to the table. One of the icebreakers I liked to use was "Tell me two special or unique things about yourself." The first time, in a team of 10, at least three people could not tell me anything special about themselves. When I became a faculty member, I found the same thing to be true. Adult students who were studying to be healthcare administrators had a hard time telling me what was special or unique about themselves or what they brought to the table. I asked myself, "How can these people get other people to believe in them if they don't believe in themselves?" I then set out to help them learn to believe in themselves more. 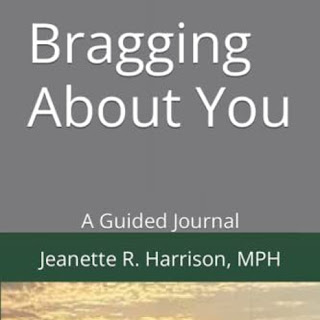 For Sale Now On Amazon
As a result, I developed a tool to use in class and in work groups called, "My Brag Book." It was a simple tool students or employees could use just to remember the positive things about themselves. One section read, "Five Positive Things About Myself" and another was "Five Accomplishments I Have Had." That little handout I made then became part of "Bragging About You: A Guided Journal."

A few years later, I was no longer teaching, and the very beginnings of "How Healthcare Works" had started. At that point, "How Healthcare Works' was primarily a blog. It was 2017. I lived in Missouri at the time, and we had just bought a home. As part of my morning coffee routine, I would meditate for 15 minutes. My meditation at that time really consisted of mostly quiet time sitting on my deck with my dogs, listening to the sounds of nature, and trying to clear my mind of whatever thoughts would come.  I used to like to write on my sun porch in the mornings, sit in my sunny kitchen, or curl-up in my large home office chair, and write in my journal. I had the journal set up in three sections, "Dreams. Goals. Gratitude." For each section, I would write 10 items that I wanted to focus on. I tried to connect the "Dreams" and "Goals" sections as much as possible, because I believe that dreams are achievable through goal setting.
Even though I tried to keep thoughts from coming to mind while I meditated, I felt like they crept in anyway. I would look out at my dogs playing in the yard, and these affirmations (or aphorisms) would sneak into my mind. I started writing these self-directives in a notebook around 2018. These motivational messages lifted me up after what had been a very challenging time in my life. I even created merchandise with several of the affirmations, and they are for sale in the How Healthcare Works Shop. Later, these statements became the prompts for the self-affirmation pages.
Even though I don't mention it in the "Acknowledgements" of the book, many of the books' parts came to me from those early mornings in Missouri. I wish I could credit the sunshine, the birds, the trees, the flowers, and the peacefulness of my backyard. Putting it all together was an idea I developed my first year in Idaho, about 2021. Then, as I watched healthcare workers and others receive what I called the "psychological beatdown" during the pandemic, I knew that many of us needed a "pick me up." As a result, the "Bragging About You" program was developed. "Bragging About You: A Guided Journal" is only the beginning.